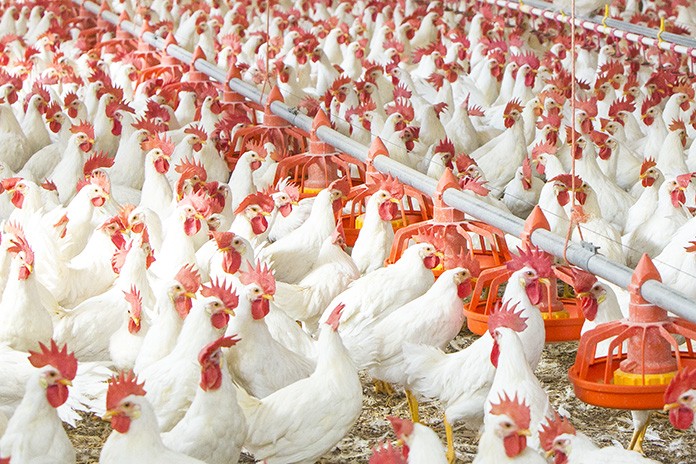 The government is promoting smaller livestock to limit the rise of methane emissions, in a plan that is 80% dependent on international finance

Ethiopia is hoping to induce a shift from beef to chicken production as part of plans to deepen its emissions cuts and increase its climate resilience by 2030.

The East African nation country has more livestock than anywhere else in Africa. The sector, dominated by cattle, accounts for 48% of national greenhouse gas emissions, according to its improved climate plan submitted to the UN this week.

The government has identified agriculture as a priority sector to help create rural employment opportunities, boost exports and help achieve economic growth of 10% a year over the next decade.

Urbanisation and a growing population is expected to increase demand for meat, which risks driving up methane emissions, Fekadu Beyene Aleka, commissioner for the environment, forest and climate change commission of Ethiopia, told Climate Home News.

Cattle belch methane, which has a stronger warming effect than carbon dioxide. To limit methane emissions, the government wants to increase the share of poultry, fish, and small ruminants. Under its updated climate plan, Ethiopia said it wants to replace non-dairy cattle with chickens, sheep and goats.

By 2030, the government wants to increase the amount of commercial chickens sold from 33,000 tons to nearly 81,000 tons and produce nearly five times more sheep and six times more goats.

The plan includes replacing cattle and oxen used as working animals with tractors and improving the health and productivity of cattle to produce more diary and meat per animal.

The measures are projected to reduce emissions by 7.6% compared with business as usual by 2030 – subject to international finance.

Ethiopia said it would cut emissions nearly 69% below business as usual in the next nine years, conditional on 80% of the $316 billion price tag coming from international sources.

Ethiopia contributes just 0.04% to global emissions and has 1.5% of the global population.

With national resources alone, Ethiopia pledged to cut emissions 14% below business as usual by 2030 – which would see emissions increase slightly compared to 2010. The calculations are based on a revised 2010 baseline, which reflects updated economic and emissions data.

After livestock, the land-use and forestry sector is the second largest source of emissions in Ethiopia and provides the largest potential for emissions reductions.

The plan was developed on the country’s 10-year development plan finalised in 2020 and its Climate Resilience and Green Economy Strategy.

With nearly 80% of the population living in rural areas as smallholder farmers, livestock is mainly used a means of livelihood in Ethiopia. Cattle and beef are exported to neighbouring countries, bringing cash income to farmers and pastoralists for whom keeping live animals is also a sign of social prestige, Beyene said.

“It’s also about shifting the culture from keeping large animals to small animals,” he said, adding that implementing the measure will require engagement with communities, adequate market infrastructure for farmers and incentives that will be piloted on small-scale projects.

“People don’t want to move away from the status quo unless there is a proven opportunity,” he said.

Cynthia Elliott, of the Global Climate Programme at the World Resources Institute, which supported a consortium of consultants to help the government update its climate plan, told Climate Home that given Ethiopia’s limited resources, the government has shown “tremendous ambition”.

She described measures to shift from beef to poultry as “still a bit exploratory”, with the details to be worked out.

For Simon Addison, of the International Institute for Environment and Development (IIED), promoting the diversification of the livestock sector may do more to help the country adapt to climate impacts than cut emissions.

Sheep and goats, which browse on bushes and shrubs, are relatively resilient to the droughts that are becoming more frequent in the Horn of Africa because of climate change. Cattle need more water and access to green pasture.

Pastoralists affected by drought or conflict that have lost their livestock or access to grasslands are increasingly looking to poultry as an alternative livelihood. “Poultry can be a good option for those who are no longer mobile,” Addison said.” It is possible to produce quite intensively, with little capital and it has a high market value.”

Although there already is a significant shift towards diversifying livestock among pastoralists, the measure could be seen as a top-down “imposition of maladaptive measures” from the government onto communities that want to continue mobile beef production, Addison warned. This could have “serious implications for cultural norms, social capital and social dynamics among mobile pastoralists,” he said.

Through holistic rangeland management, mobile pastoralism can also help sequester carbon in the soil and improve rangeland health, he added.

And the share of agriculture in the GDP is predicted to fall by nearly half between 2011 and 2030, while construction and services are expected to drive economic growth, with urbanisation and industry increasing emissions.

Carley Reynolds, a climate and energy analyst at Climate Analytics, told Climate Home energy emissions are low in Ethiopia with more than 95% of power generated from renewables, overwhelmingly hydropower. “The challenge will be to keep its power system clean… and avoid investing in fossil fuels” as electricity access increases, she said.

Under the plan, Ethiopia aims for 100% of households that aren’t connected to the grid to use off-grid renewable electricity for lighting by 2030 – up from 40% currently.

Hiking and Horseback-Riding in Yosemite Travel Guide For Beginners