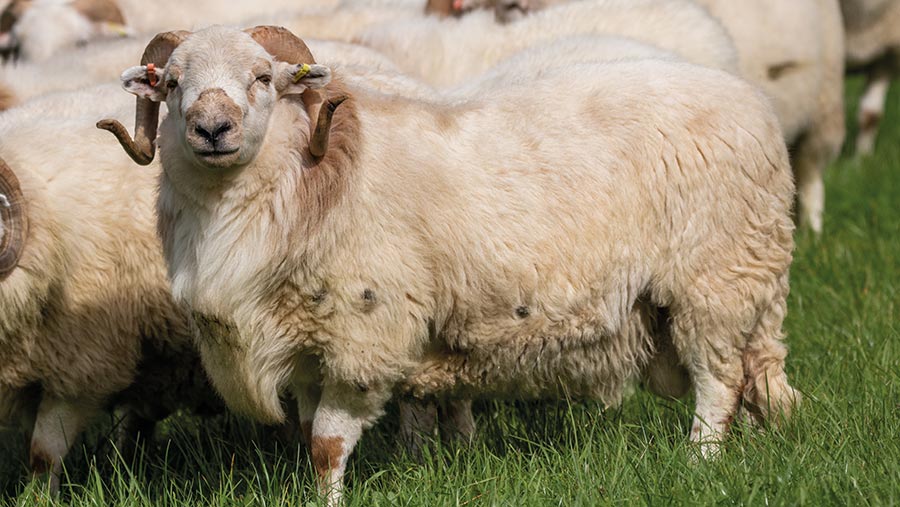 Welsh Mountain sheep producers from across Wales have joined forces to raise the commercial standard of regional types of hill sheep.

The ProHill producer group is the biggest collaborative breeding project of its kind in Wales. Hill ram breeders in the group are advancing flock output using the latest genetics technology and performance recording to monitor their commercially managed flocks.

The farmers are using the Hill Index, developed by Signet and Hybu Cig Cymru (HCC), to combine both maternal and carcass traits.

As they look towards a future of no direct subsidies, strong emphasis has been placed on reducing production costs and maximising output.

Signet uses the data to calculate the Hill Index and identify the best-performing sheep and monitor progress.

Through performance recording, the ProHill farmers are now producing purebred, high-index rams from more than 10,000 Welsh breeding ewes. These tups have been bred to produce earlier-finishing lambs and flock replacements with exceptional maternal ability.

Performance recording has also resulted in improved carcass weights and grades of progeny.

Visit our Know How centre for practical farming advice

But the 12 farm businesses taking part in ProHill are using DNA testing to verify the sire and dam to overcome this. This is then used to select and breed from their best-performing animals.

To give an accurate picture of a ewe’s maternal ability, lamb performance from birth to eight weeks is being monitored and, to highlight a lamb’s own performance, its growth and carcass traits are being measured from eight to 20 weeks.

This data is used to develop estimated breeding values to help the farmers make informed decisions in their selection procedures.

By increasing genetic merit, the group members say they can produce lambs that meet market requirements from their extensive, forage-based systems and breed rams with known, improved performance.

Commercial hill flocks can benefit too by using their high-index rams.

The Lloyd-Williams family are reaping the rewards of taking a data-driven approach to genetic improvement in their organic hill flock.

As more than half of their land is made up of unimproved hill pasture, they need a hardy ewe that can produce lambs from a low-input system.

By using performance recording to inform flock management decisions, the 720-ewe Welsh Mountain flock is producing fast-growing lambs that can finish off grass.

“Every year, with no change to our management and no extra feed, genetics are allowing us to produce more meat from more-efficient sheep,” says Rhodri Lloyd-Williams, who farms with his father, Simon, on the holding at Moelgolomen, Talybont.

Breeding
All his replacement ewes are home-bred – he only buys breeding rams. He says limited access to performance-recorded stock had until now hindered progress in Welsh hill breeds. Non-recorded rams he had bought at sale had been disappointing.

“A few years ago, we spent a lot of money on a big and beautiful ram, but when he was performance-recorded his index was 77 – our average index is 190. At weaning, his lambs were an average of 5kg lighter than the lambs from our highest-performing ram,” explains Mr Lloyd-Williams. The average index of all Welsh Mountain breeds is 126.

Mr Lloyd-Williams runs his flock commercially and lambs all ewes outside.

There are sufficient fields to single-sire mate, but funding for DNA testing through the HCC Hill Ram Scheme has allowed hill flocks without this facility to performance record.

The farm selects females for good lamb growth and survival and the priority is to have a hardy 40-45kg ewe, since more than half the unit rises to 450m and is made up of unimproved hill pasture.

The flock is also outwintered at 300m and during winter, the conditions on the hill mean that good fat cover and body condition score are essential in this environment for ewe survival. This also means good milking ability in spring, which improves lamb survival rates.

“Our target has been for the ewes to wean their body weight in lamb and we’re getting there,” he says.

They also select for good teeth and tight wool. He admits that it can be a battle to achieve a balance between type and figures.

“We don’t want to drift too far away from type. We select on type, but apply the index. If we have a really nice type ewe with a poor index, we might retain her and tup with a high-index ram.”

Lamb performance benefits
Lambs that the Lloyd-Williamses don’t retain for breeding are sold fat. By performance recording, they are reducing the time taken for lambs to achieve sale weight and improving conformation grades, but they have maintained ewe size and maintenance requirements.

Last year’s lambs were finished off grass to average 14kg deadweight, and the majority were within specification – mostly Rs and with an increasing number of Us.

Before they started performance recording 20 years ago, they were producing 11-12kg lambs and many of these were sold through the market as stores.

Ewes are producing more lambs with no extra feed and scanning percentage has lifted from 120% to 145% since 2000.

All ProHill flocks have a strong focus on maximising performance from grass alone.

“I like to challenge our buyers to shake a bucket at the sheep we offer for sale, none of them have ever seen concentrates,” says Mr Lloyd-Williams.

Markets
Draft ewes and surplus ewe lambs are sold off the farm and he sells yearling rams at the annual Welsh Mountain sale in Aberystwyth.

“One of our customers has a large flock of New Zealand Romneys; he wanted an easy-lambing ram and tried a couple of ours.

“The eight-week weights were higher than lambs from a pure Romney. He has since bought another 25 rams.’’

Performance recording in the hills had a huge trickle-down effect on the whole sheep industry, Mr Lloyd-Williams suggests.

“It’s worth supporting performance recording because of the [improved] return on investment.”

As a ram producer, there is just one downside to the improvements he has made through performance recording.

“Our rams go on forever. Our customers can run them for five years or more, so that means fewer ram sales.”

Water-soluble probiotics vs AGPs: the changing landscape of poultry farming

Cattle producers should take caution while calving in frigid temperatures