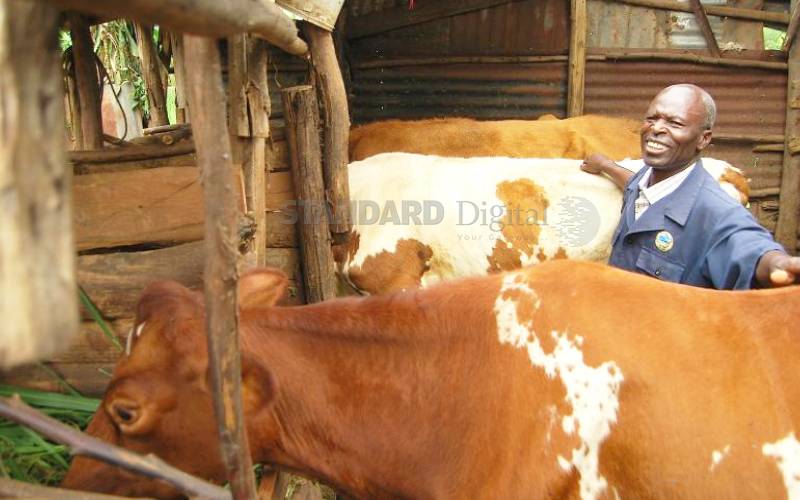 Mr Alukungu, from Imasava-Imuliru village, is the latest victim of a wave of insecurity where many families have lost their cows to thieves who sneak into homes at night and drive away with them.

Investigations by Nation.Africa have established that the thieves are hired by rogue butchery owners to steal the animals and slaughter them in the bush at night.

In Butsotso Central location, villagers have lost 20 dairy cows in the past one month to the criminals, who are said to be youths.

Livestock theft has deprived rural families of their sources of income during tough financial times.

Affected families say after slaughtering the cows, the thieves usually abandon parts of them, including heads, legs, entrails and skin.

The carcasses are later transported secretly to butcheries using tuktuks and sold to residents.

Last Friday, two suspects were beaten to death after they were caught trying to drive away cows from a home in Mahondo village at night.

The owner raised the alarm after he heard a commotion in his cowshed. Villagers responded and cornered the suspects as they were attempting to flee.

For Mr Alukungu, the theft of his dairy cows dealt him a big blow.

The cows were producing 10 litres of milk daily, which he sold to neighbours, but now his dreams have been shattered and his source of income in retirement destroyed.

The criminals have cast their net beyond Kakamega County. In April this year, seven cows suspected to have been stolen from a farm in Nakuru were traced to a home in Khayega.

Driven across the boundary

A suspect was arrested and arraigned and the matter is still pending in court.

In Kakamega, cow theft is rampant in villages in Butere, Matungu, Lugari and Shinyalu sub-counties.

In Matungu and Butere, stolen animals are usually driven across the boundary to neighbouring Siaya and Busia County, making it difficult for the owners to trace them.

Kakamega East sub-county police Commander Robert Makau said police were investigating the incidents and looking for a man nicknamed ‘CID’, who is reported to be financing the theft of the cows, which end up being slaughtered and sold in butcheries.

“We are monitoring the movement and supply of meat to butcheries at Khayega and Shinyalu markets and other trading centres. What we are trying to establish is whether the meat is originating from a slaughterhouse,” he said.

“But we are still facing challenges because residents are hardly reporting the incidents to us so that we can arrest the suspects.”

After the thieves stole Mr Alukungu’s cows, they brutally killed one of the cows by twisting its neck and piercing with a sharp piece of wood.

It is unclear what could have prompted them to harm the animal in such a brutal manner before they carted away the rest of the cows on a pickup truck.

“I had woken up at 4am to milk the cows but when I got out of the house, the cowshed was eerily quiet. My cows were gone. For a moment, I thought I was dreaming. I looked around the compound and noticed the cows were missing,” recalled Mr Alukungu.

He woke up his neighbours and after searching the neighbourhood, they found one of the cows lying dead down the road from his house.

Butsotso Central acting Chief Samuel Oketch said the suspected thieves in the Mahondo village incident were beaten to death by angry villagers who had lost their animals after criminals raided their homes.

Mr Oketch said one of the cornered suspects had pleaded for mercy and identified their financier as a man nicknamed CID.

“The information we have gathered is that this man known as CID owns several butcheries in Khayega and has been supplying meat to other butchery owners. He has been paying the thieves to steal the animals at night for slaughter,” said Mr Oketch.

After the killing of the two suspects in Mahondo village, residents of Ibinzo village have been receiving messages from unknown people who are threatening to attack them for lynching the suspects.

Mr Geoffrey Ikutwa, assistant chief for Shimanyiro sub-location, said one of the stolen cows was recovered in Shiveye sub-location covered in a sack to make it difficult for people to recognise the animal.

“The suspects fled, leaving the cow behind after they were spotted by villagers. We have managed to identify the owner and handed back the animal to him,” said Mr Ikutwa.

“We have the names of the suspects but some of them have gone into hiding to avoid arrest. We are tracking them down and they will soon be where they belong – behind the bars,” said Mr Muhanji.

Residents have accused police of failing to patrol the area at night.

“Villagers have now resorted to forming vigilante groups to patrol their neighbourhoods at night and respond to any emergencies in case of raids by criminals involved in the theft of cows,” said Muhanji.