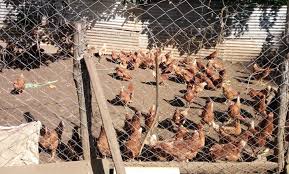 Imports of Uganda processed chicken in Kenya are continuing to grow, creating uncertainty for local farmers.

A Baba Ndogo based firm is behind the importation of processed chicken from Uganda. The firm has imported over 87,500 Kilograms in the past one week, an act that has rendered local poultry farmers out of business.

The firm is importing processed chicken tax-free, whereas a Kenyan farmer is taxed 25 percent to export to Uganda.

Documents in our possession show that Finsbury imports from YoKuku limited a  poultry company located in Kampala Uganda every week, at the time when local farmers stuck with their chicken in the farms.

“Our farmers are not selling at optimal, they are just disposing of their chicken because over 50 percent of hotels and restaurants, as well as fast food joints, have been closed. Why import processed chicken from as far as the distance of 700 kilometers whereas you have farmers within the radius of 70 kilometers,” read a part of a statement by Kenya Federation of Poultry Farmers.

The statement further said, “there are plenty of chicken products within our borders, but the Director of Veterinary Services is issuing import permits to suppliers who are taking shortcuts and ignoring farmers’ involvement.”

Commenting on the matter, Monica Wanjiru, a farmer in Nyeri, questioned, “with plenty of chicken supplies within Kiambu, Nyeri, Kajiado, and Nairobi, why is the government through the department of livestock allowing imports from Uganda?”

Ms. Wanjiru further added, “The irony is that the government has continued to allow Uganda exports in the country, even at this time when Kenya has the capacity to grow chickens to feed the entire county.”

Our investigations show that Finsbury is selling a kilogram of processed chicken to Skymart in Kawangware at KSh305, while local farmers are selling chicken at KSh350 per kilogram as the cost of production is above Ksh 330 per kg packaged.

“If the cost difference between Uganda and Kenya chicken is Ksh45, why don’t Finbury buy from local farmers. They incur huge costs on logistics and transportation,” Ms. Wanjiru said.

In a technical paper presented to the Department of Livestock in December 2019, and developed jointly by Livestock stakeholders, it proved that Hudani Manji Holdings (Yokuku), the Ugandan poultry producer that has been exporting product to Kenya is effectively dumping products into the Kenyan market.

“The price offered to the majority of the customers here in Kenya is lower than Hudani’s direct costs (production, transport, and inspection fees) and the prices generally offered to customers in Uganda,” the document read.

Dumping raises important issues for Kenya and its policymakers, from unemployment to food security, and has implications for economic and social stability. Kenyan producers would compete strongly against imported products from Uganda if the competition was fair, but dumping has made it impossible to compete fairly in a growing local market that has seen the proliferation of price-sensitive retailers and customers.

In his National address a fortnight ago, President Uhuru Kenyatta urged farmers to continue with their agricultural activities at this period of the Covid-19 pandemic. “Similarly, I encourage our traders and farmers in fresh produce to continue with their agricultural activities, so as to ensure the continued supply of the farm produce to our markets.  Such farm products embody the diversity of Kenya includes; Rice, Beans, Maize, Potatoes, Cabbages, Miraa, Tomatoes, bananas, and other food items,” said President Kenyatta.

To reinforce the President’s sentiment, Kenya Poultry Breeders Association in a press statement said, “We foresee a massive shortage of chicken and egg supply in the next coming months due to decline in day-old chicks placement over the past three weeks.

Therefore, we are encouraging our farmers not to stop growing chicken because there is a bigger opportunity coming soon. The government has laid down measures to ensure poultry farming will not be interrupted including feed supply and chicken distribution.”

The poultry industry is an important component of the livestock sub-sector, which accounts for about 10 percent of national GDP. It contributes about 0.7% of national GDP, while at the same time it a major source of employment, with an estimated 3 million people deriving their livelihood and income from poultry farming, processing, and related activities. It also employs veterinarians, researchers, and extension officers.

In order to safeguard the industry gains, the poultry stakeholders are urging the government to close the borders similar to other EAC countries. Both Uganda and Tanzania have closed their borders, why has Kenya kept borders open for processed chicken?

Multi-breed EBVs will allow producers to compare bulls between breeds