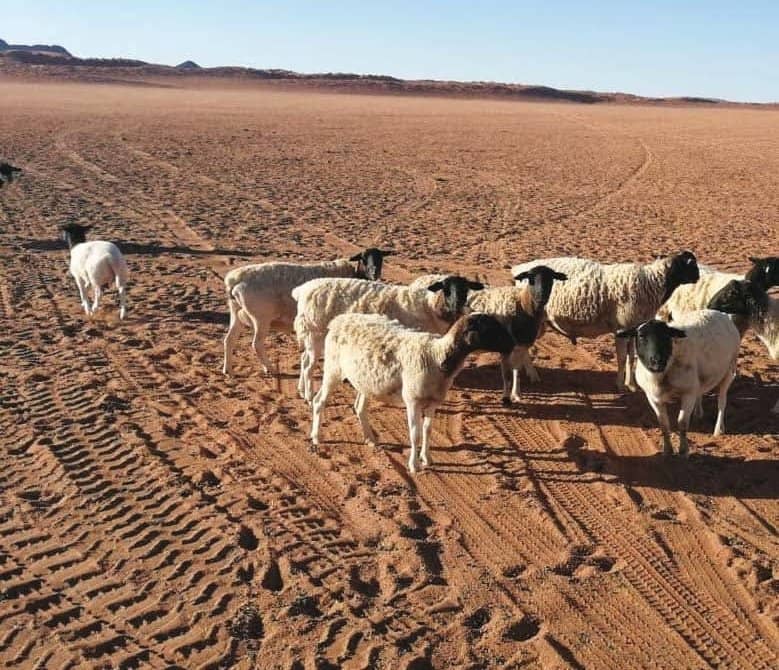 As every South African farmer knows, droughts are a frequent reality in the country. According to Prof Tertius Brand, a specialist scientist in animal nutrition at Elsenburg and a presenter during a recent webinar on drought recovery, parts of South Africa are hit by droughts at an average rate of almost once every five years.

Sheep farmers are not spared the effects of drought, and it is therefore vital that they put proper management practices in place before and during a drought to keep their animals in good condition.

It is no less important to adhere to proper management principles after a drought to regain profitability as soon as possible. According to Brand, sheep farmers can follow a number of well-recognised steps to ensure good feeding management of their flocks during and after droughts.

Nutrition
Maintaining and regaining sufficient energylevels, he says, is one of the most important
requirements for animals in a drought.

“During a drought, animals have to walk far in search of food and water. The energy that the animal uses to walk in search of these can use 30% or more of its daily maintenance needs.”

The farmer should therefore ensure that animals have easy access to drinking water.
He adds that the energy needs of lactating ewes and young, growing animals are considerably higher than those of animals fed only for conditioning.

Another basic nutritional principle that can be applied during a drought is the early weaning of lambs. In difficult seasons with reduced feed supplies, it can be more economical to wean lambs early to lower feed costs and ensure that the ewes regain condition.

“A study found that the early weaning of lambs at about nine weeks and feeding of lambs for six weeks can save a farmer about 30% in feed costs to the ewes,” says Brand.

Weaning lambs early has the benefit of high feed conversion.

“Young lambs are also more effective in this regard due to muscle building as opposed to fat deposition.”

Brand adds that creep feeding plays an important part in the early weaning of lambs as it ensures that adequate nutrition is supplied to lambs while reducing the demand on ewes, giving them more time to regain condition before the next breeding season.

When to start feeding animals
As a rule of thumb, explains Brand, a farmer should start supplementary feeding before ewes that are in good condition lose 15% of their initial weight. If animals are allowed to lose more weight than this, their reproductive processes will cease first, followed by eventual feed refusal and ultimately death from starvation.

When enough roughage is available on the veld, animals should be provided with a production lick aimed at stimulating the rumen, and allowed to graze. Feeding animals intensively in a drought lot is about five times more expensive compared with maintaining them on natural veld.

When feeding animals, a farmer should use a hay ring as it prevents wastage by about 30%, Brand advises. But, he adds, it is also important that enough feeding space be provided where animals are fed intensively so that they are not forced to scuffle and compete to gain access to the feed.

Post-drought management
An important goal for any farmer emerging from a drought is to restore the enterprise to optimal productivity and profitability as quickly as possible.

“The main factors that contribute to the profitability of your sheep flock are reproduction
and the growth of lambs,” stresses Brand.

“At R3 500/t of feed, this increase will cost about R420 per ewe. That’s a fair amount of
money that needs to be spent to get ewes back to their ideal weight,” he says.

Therefore veld grazing, if available, in combination with the right supplemental lick, remains the most affordable source of nutrition for sheep after a drought. However, it is important to be mindful of the farm’s carrying capacity, as the veld, too, will require time to recover after a drought.

If the veld is still in bad shape, the secondcheapest option is planted pasture, provided
that the farm’s water resources are sufficient
for establishing this, says Brand.

“For each kilogram of weight gain for a ewe during breeding, the lambing percentage increases by 2%. So ewes that are 5kg heavier at mating can mean 10% more lambs from a flock at birth.” Moreover, every kilogram increase in weight during this period results in a 1,4% increase in weaning rate.

Feeding during the last six weeks of pregnancy is also important for ensuring a viable lamb. A farmer should remember that during and after a drought all the normal management
principles, such as guarding against parasites and eliminating non-productive animals, still apply.

“The latter can be done by good record-keeping and will help immensely in making decisions during and after a drought,” says Brand.

FEED MILLS AND GROWERS WEIGH IN ON FEEDVIEW®