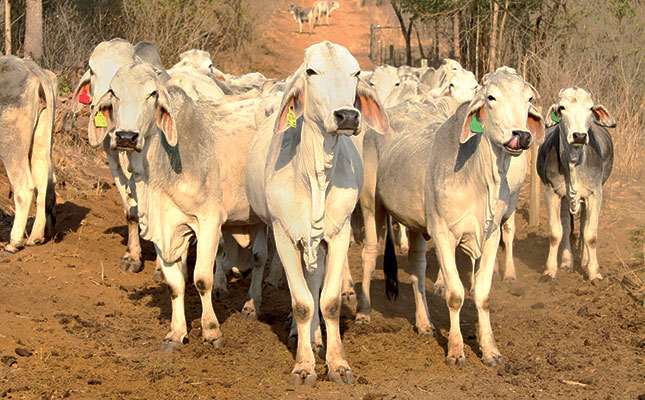 A dream to farm Brahman cattle saw Auldrich Spies switch from construction to farming. Ironically, it was his initial ignorance that led him to become a successful stud farmer today. Lindi Botha visited SS Brahmane in Mbombela, Mpumalanga.

Auldrich Spies grew up attending shows where his grandfather exhibited his prized Brahmans and instilled a love for the breed in his grandson. But health reasons saw him selling his herd before Spies could farm himself.

Spies then followed a career in construction, which, five years ago, enabled him to buy land in the Barberton area. With a photograph of his grandfather’s prized Brahman bull in hand, he set out to stock his farm.

A fortunate phone call
“I struggled to find cattle initially,” he recalls.

“Some farmers wouldn’t sell to me or didn’t even return my phone calls. I eventually googled ‘heartwater Brahmans’, as the cattle needed to be heartwater-resistant for the Barberton area. I came across a farmer in Letsitele, phoned him and told him I wanted 10 cows and a bull. I asked if he could help me.

“There followed a long silence. I asked him if he’d heard me. He asked if I was planning on farming commercially or starting a stud farm. I said, well, my grandfather had stud cattle and I had a photo of what his bull looked like. Could he please help me with cattle that looked like the bull in the photo?

“Again, there was silence. Was I saying something wrong? The farmer then started peppering me with questions. Do you want older animals? Younger animals? From which bloodlines do you want to buy?

“I said I didn’t know what he meant by ‘bloodlines’; I just wanted a bull that looked like my grandfather’s, and 10 cows. So he said I’d better pay him a visit.”

When Spies arrived on the farm in Letsitele, a whole new world opened up to him.

“I didn’t know who Llewellyn Labuschagne was at that stage. I just found him on Google. When I arrived on his farm it was clear he wasn’t just another stud farmer.

“Llewellyn is one of the best cattle farmers in the country, and his R10 Brahmans are some of the most sought after in the industry, fetching top dollar at auctions.”

Spies credits Labuschagne with much of his success.

“He taught me to look beyond the ‘picture’ of the Brahman I wanted and focus on crucial traits like hooves, constitution, skeletal issues, mouth structure and a range of other characteristics when choosing an animal.”

Labuschagne explained that when building a herd, a farmer needed to choose animals that looked alike and fitted in with each other. It wasn’t a good idea to buy a mix of animals at random simply because they looked good individually; one needed to look at the cattle’s pedigree and breeding history.

Spies notes that the average stud farmer sells and exits the industry within three or four years.

“It’s an expensive endeavour and if you don’t know what you’re doing, then it’s even more costly and never pays off.”

After five years, however, his own business is going from strength to strength and he has since partnered with his veterinarian wife, Narissa, and Tinus Viljoen, a Highveld Brahman farmer.

Spies’s herd grew substantially from the initial bull and 10 cows, and soon the Barberton ranch became too small. He thus had to make the decision to move. But farms suitable for cattle farming are scarce and expensive in the Lowveld, with high-value crops such as avocados and macadamias taking precedence.

Eventually, however, Spies found a 360ha ranch on the outskirts of Mbombela and he relocated his herd. It’s hard to believe that the land is suitable for Brahmans, however; as far as the eye can see, it’s just rocky mountains.

“That’s the beauty of a Brahman,” smiles Spies. “It’s hardy and adaptable, has good walking ability and is structurally correct.”

Grazing
Although the winter veld looks rather dreary, the summer rain transforms the landscape into a lush expanse. Both seasons provide ample food and Spies can maintain a stocking rate of 2ha per cow and calf.

Goedgeluk Farm has both sweetveld and sourveld, and the plan is to convert the lower areas into planted pasture consisting of teff and lovegrass for winter grazing, while the hills and mountain areas will be grazed in summer.

Rainfall is approximately 1 000mm/year. Spies maintains that a breeder should not buy a stud, but rather breed his or her own herd over time with the right genetics. Some 10% of his cows are artificially inseminated, and 90% are bred to selected herd sires.

“Our aim is to artificially inseminate more cows to do corrective breeding,” he explains.

“Functional, effective cattle with natural muscling and enough bone are the ideal animal for our farm’s landscape and climate. Only cattle with exceptional constitutions can survive and avoid culling. Functional cattle with an excellent pedigree and docility are the cornerstone of our selection programme. These cattle also make good dams.”

The challenges of the Lowveld
The Lowveld’s heat and humidity bring their own challenges. This year saw a particularly cold winter, with the temperature dropping to 3°C, while the past summer had highs of 43°C. Spies notes that winter calving is usually possible, as long as he provides the necessary calcium licks.

He vaccinates and dips for all relevant tick-related diseases, and adds that the top cows in the industry are expensive and must be protected at all costs; this can only be achieved by good management, he says.

He explains that Lowveld cattle have proved over many years that they can survive and produce in the rest of Africa. His market therefore stretches from the Highveld, to Mozambique and Swaziland.

Striving for perfection
Asked if he is still chasing the ‘picture-perfect’ Brahman of his grandfather, Spies laughs and says that modern cattle are far superior to his grandfather’s.

“This is due to breed improvement of EBVs, pedigrees, traceability and testing for feed efficiency.

“My aim is to breed the perfect Brahman. This is my passion, as well as my wife’s, which keeps us focused and striving to breed the best.”

He adds that having the support of one’s family and spouse is crucial.

“They must buy into the concept as well. If we have to cancel a holiday because the farm needs attention, then Narissa understands, because she’s as emotionally invested as I am.

“Surrounding yourself with like-minded people serves to stoke the fire in your heart for your cattle and the quest for perfection.”

Multi-breed EBVs will allow producers to compare bulls between breeds