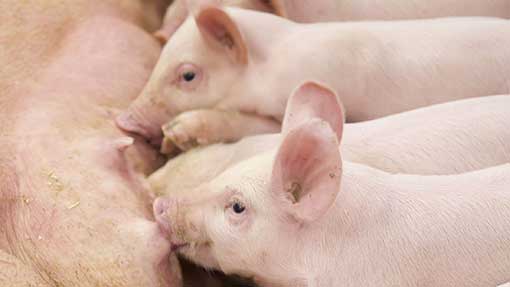 Over the past decade, the use of genomics in pig breeding has helped to accelerate genetic improvement and on-farm performance.

“Genetics companies in general have made great strides over the years by making use of performance testing to govern breeding decisions,” says Jurgens Reynders, managing director at DanBred Africa, based in Pretoria.

“The combination of genomic selection with conventional selection strategies has significantly improved the effectiveness of selection, enabling much quicker gains.

It has also made it possible to breed for new and otherwise difficult-to-breed traits, such
as disease resistance.”

DanBred, a Danish company, claims to be the first to have used and implemented DNA testing, in the early 2000s, as a tool for increasing selection accuracy.

The company today uses genomic selection on every male and female pig born on its 23 nucleus farms in Denmark, with more than 100 000 pigs tested annually.

“The technology has resulted in 30% more genetic gain than what we would have achieved by using traditional breeding and selection methods,” says Reynders.

While results will inevitably vary from one farm to another, improved genetics generally
enable farmers to scale down on the number of sows in production. This is due to increased fertility, which means that fewer sows are needed to produce the same number of
piglets.

In addition, improved feed conversion in both sows and finishers, reduced mortalities, and improvements in growth rates and carcass grading all result in better returns.

Many benefits
Reynders estimates that a farmer using the DanBred programme would see a direct benefit of R35/ slaughter pig/year. This is due to the cumulative effect of improved daily gain and feed conversion, a higher number of survivng piglets, better conformation, a higher lean meat percentage, greater longevity, and increased male fertility.

To take one parameter, DanBred was the first genetics company to release genetic
material that resulted in sows producing an average of 30 weaners/year, with some of its
leading farms in Denmark now seeing 40 weaners/sow/year.

“The current national average in South Africa is between 24 and 25 weaners/sow/year, but very good producers are starting to reach the 30s. It’s only a matter of time before South African producers also achieve world-class efficiencies and performance as improved genetics become available locally,” says Reynders.

Feed conversion (the ratio of feed requirement to body weight gain) has also seen steady
improvement. A ratio of 3,8:1 was considered impressive and rare 10 years ago, but today some South African farmers are achieving a dead weight herd feed conversion ratio of 3,1:1.

Challenges
According to Reynders, the ban on live pig imports is one of local producers’ greatest challenges.

“South Africa is one of the cleanest countries in the world in terms of pig diseases, with many of the devastating pig diseases and pathogens not being found here.

“For this reason, the country has strict rules governing the import of live pigs. These
render our company specifically reliant on frozen semen for herd improvements. Using frozen semen works well, but it slows genetic progress a little,” he says.

Another challenge relates to pork consumption.

“South Africa has excellent and highly efficient pork producers, but pork consumption per capita is low in comparison with that of European countries. To grow the market, we need to improve the way we present our products as well as the eating experience.”

Reynders adds that the South African system does not really reward farmers for improved
meat quality. Nonetheless, providing consumers with a good eating experience has always been a top priority for DanBred and most other breeding companies.

“Pork quality affects protein choices and has the potential to increase consumption, to the benefit of the entire industry,” he points out.

Competition is tight, with three of the foremost international genetic companies in the world, DanBred, PIC and Topigs, active in South Africa, and each emphasising that its genetics are the best.

Research is expensive, moreover, resulting in many of the smaller companies closing down.
According to Reynders, DanBred’s main advantage is that it is owned by pig producers, with the company’s breeding goals being balanced and aligned to growers’ needs.

These goals are only adjusted when there is a case for more profit for the producer. In addition, DanBred breeds and selects for LP5, a trait that measures living piglets per sow
on day five after farrowing.

“This has enabled us to become the breeder of the most fertile sows, as well as the sows with the highest number of pigs weaned per sow,” says Reynders.

The future
With this ongoing genetic improvement, it is easy to surmise that the industry might
sooner or later hit a ceiling. Reynders disagrees, however.

“Our models at DanBred show that the current rates of improvement in terms of lean
percentage, feed conversion and live-born in all our breeds are expected to keep increasing. This is thanks to the use of genomic selection and ongoing development
of new technologies, such as metabolomics [the study of the substances involved in the body’s conversion of feed into energy], big data and machine learning, which are adding extra genetic progress in all important traits of our balanced breeding goal.”

He predicts that improvement in genetic material will further accelerate on-farm performance and production parameters, hastening the trend of larger producers growing even bigger.

Smaller producers will continue to have a role, however, provided they are efficient and cost-competitive.

With increased global demand for free-range and antibiotic-free produce, genetic companies will also place more emphasis on breeding pigs that are easier to raise outside and more disease-tolerant.

Most breeding companies are preparing for this by including robustness in their breeding approach. Reynders says that the DanBred Duroc, for example, is a popular choice for outdoor production, as it is particularly robust.

While genetic companies are working on disease-resistant and -tolerant pigs, he foresees that there is still a long way to go to a total ban on antibiotic growth promoters.

His advice to producers when selecting genetic material is to always buy from one source if possible.

“And whether you buy replacement gilts or breed them in-house, it is important to use the very best and latest genetics available.”